I had this great opportunity to be invited to present at the ESANA CE and the Holistic Hoofcare Foundation Seminar in the USA a couple of weeks ago.

What a great bunch of people. And, as so often happens in these seminars, some great aha-moments were had by the participants. When you see a horse change from tense and tight in the muscles with a toe-first loading stride, to one that relaxes, drops the shoulder blade, and strides out better – just in the one demo trim – that is truely special.

Even more exciting when you get feedback like this:

“… I got the most significant release indicators I’ve seen in ages….craned his neck all the way around, ears up and big licks and chews.  Moreover, he moved so much better right away and particularly in the morning when we got a blanket of light snow to usher in a new era. Words are inadequate to express my gratitude. “

“I can not recommend Thorsten Kaiser more! He gave an outstanding seminar this week. I highly recommend him to anyone remotely horsey related. “

Just how easy/hard is it to fasten those straps?

I have to admit, when I first had the new Easyboot Fury Heart boots in my hand, naturally, I tried to fasten the straps in the front – to my surprise, it was quite tricky. My first impression was, wow, if I as a practitioner struggle with this already, how are customers going to get on with this?

But then, it all changes when the boot is actually on the hoof. The moment you have a horse stand in the boot, fastening those straps couldn’t be any easier. I couldn’t believe the difference. I got my wife to do up the boots – same result, she thought it was quite easy to do.

See the video below to get an idea of what I mean:

The boot itself is quite easy to apply and remove from the hoof.

So, final impressions are that the boot is quite practical and simple to work with. Definitely a great tool to have.

A client just posted this video with one of her horses. She’s pointing out the link of playfulness and sound hooves.

Thorsten will be presenting two seminars in this year’s Equitana in Auckland.

You can download the exact time table from here, once it is available.

Understanding the difference between Laminitis and Founder

The presentation is going to show that Laminitis and Founder are not mysterious conditions they are often made out to be, but rather that they can be dealt with logically and systematically.

Boot Fitting Strategies – How to make Booting work for you!

In Saddle-Fitting, there are two main strategies to fit saddles: 1) fit to the existing horse’s back, and 2) fit to where the horse’s back is intended to develop towards and fit for that. In Boot-fitting, we find the same two strategies.

This presentation is going to discuss the two approaches and weigh up their pro’s and con’s with each other. After the presentation, you will be able to make a more informed decision on which approach might be more suitable for your horse.

Here a nice little dissection video of a hoof in the way we look at hooves at our hoofcare seminar. It’s always great to see when people walk away from a seminar with enriched understanding.

The key thing to understand here, but not mentioned in the video, is that some internal structures, aka pedal bone, navicular bone, and deep digital flexor tendon are descening slightly on weight bearing. When you see how little space there is from the top of the collateral groove to those descending structures, then it starts to make sense, that if the horn is not “moving out of the way”, aka is not descending as well, the soft-tissue in between will get compressed. Since this is is uncomfortable to the horse, the horse will choose not to load the back part of the hoof, i.e. it will not demonstrate a heel-first loading in movement or it will stand under when at rest. Unfortunately, this is easily mistaken for conformational issues, or we here statements like “that’s just how this horse is”, but we must realise that is a compensation issue.

The purpose of trimming such a foot must be to establish the correct deflection of the hoof capsule in the compromised araes and with that establishing comfort. This will alter the way the horse chooses to load the feet in movement and rest. In order to achieve this, the trim must focus on the internal structures and hoof deformations at corium level, rather than aiming for a certain look on the outside. Illustrated here.

If you would like to improve your understanding of the hoof, come and attend one of our seminars.

We are very excited about attending EquiDays this year. See us at site EM10 in the marquee.

IBEM will have people on site to provide info on holistic hoofcare and our seminars and professional’s course. We will be giving some trimming demos on site at regular intervals. Check our FB page for time announcements.

Thorsten will also be presenting some seminars in the Seminar Classroom:

This link shows the full time table for EquiDays.

We also will have a section dedicated to

where you can see and purchase our products like hoof boots, trimming tools, etc. In particular, we will have the new hoof boot The Fury on display. 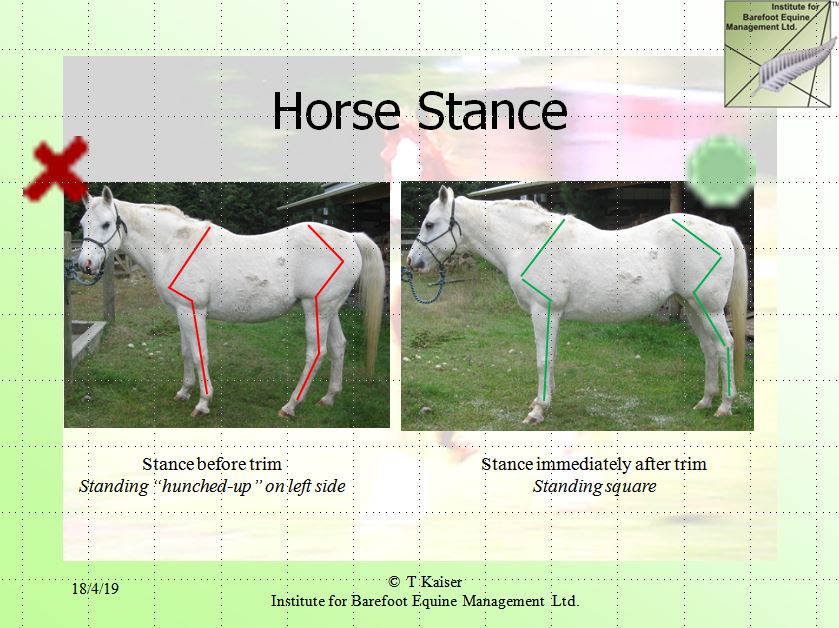 Why do we see this instant change? Horses choose a stance that is most comfortable to them, or rather, is least painful for them. In the before-trim photos, the horse unloads the heels by standing under and putting more weight on the toes. Once the hooves are trimmed for comfort, then the horse finds it quite pleasant to load the heels and chooses to stand with vertical cannon bones, which allows it to use it’s stay-apparatus.

This illustrates the meaning when a horse is “due” for a trim. It should not be driven by a trimming interval as we set it in the calendar, but rather should be dictated by the horse’s comfort level, which we can gauge by its way of standing. If it chooses not to stand with vertical canon bones, then the horse is compensating for some discomfort in the body. This can be a number of things, or combinations thereof. However, more often than not, as shown in these cases, the hooves are a major contributor.

This hightlights the point made above. As time progresses between trims, most horses tend to start compensating for uncomfortable feet again. A physiological trim can remove the pain sources and allow the horse to stand correctly. Trimming intervals must be chosen based on when the horse starts to compenstate, rather than an arbitary date in the calendar.

Another aspect to point out, the better the boarding conditions support the horse’s needs, the later the compensation will set in.

When this article was written, it was winter in New Zealand. For most part of the country that means wet and muddy fields where we keep our stock, including horses. But the issue is also present if the horses are kept on other soft substrates (loose sand, bark, saw dust, deep loose gravel, etc) at other times of the year, or worse, all year round.

One thing to remind ourselves is how the equine hoof functions. For the hoof to function, apart from the correct shape that allows this, it needs a certain firmness of the ground to provide enough resistance to expand the hoof capsule and create hoof mechanism. This hoof mechanism will allow for optimal blood flow to the soft tissue inside that is responsible to grow the right amount of horn. The soft ground now reduces this action and as a result reduces horn production and horn quality. We often hear the phrase the hoof grows less in winter.

If the horn quality of the external horn deteriorates, that is kind of obvious – brittle horn, weak frogs and pitted sole. Usually “the wet” gets the blame. However, if the internal horn, the laminar line horn that bonds the pedal bone to the hoof wall, is compromised, then this is not immediately visible. We will see the signs of that weakened bond when the ground hardens out again in spring and the foot gets stimulated more, then, out of a sudden, there is a sore horse. Often the diagnosis then is laminitis.

This does not need to be the case, if the horse has a functioning hoof and is offered firm enough ground so that it needs to spend some time on it to walk about. In reality terms that means the horse shelter and the adjacent areas should be prepared so it does not become a bog. A driveway can work well, too. We then can offer hay in those areas and make the horse spend some time on it. Providing a firm-enough ground now, will safe us (well, and the horse) trouble later on.

6yo with very contracted feet. I cropped the toes off so we can just focus on the heels and bulbs. Note the distorted bulb line, the central sulcus pushed very high and narrow, and the medio-lateral heel angles very shallow. On the right, greatly improved hoof morphology and a horse with a much better loading pattern and muscle tone. Done over 24 trims.